Can you vote your way out of a housing bust? 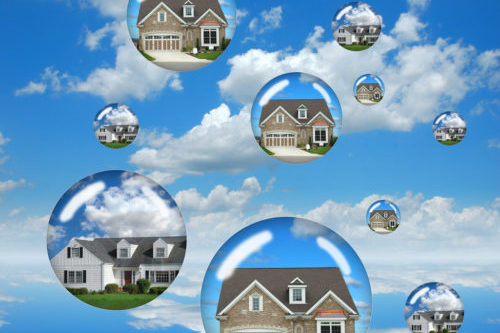 I’ve managed to escape Australia’s compulsory voting scheme by moving to London, only to receive monthly letters telling me to pay a TV licensing fee, despite not having a TV.

If I don’t pay, I risk ‘a visit from the Maidstone Enforcement Officers’. And a fine that makes missing an Aussie vote look boring. Luckily, there is a black-and-white TV option, which is significantly cheaper.

Here in Europe, less than half of people will bother to vote for their three EU presidents in the election next week.

Actually, nobody will. Because none of the EU’s presidents are up for election. Ever. And barely anyone could name them anyway, even if we could vote for any of them.

But that’s another story. My point is, perhaps Australia’s political system isn’t so bad after all. Comparatively speaking, anyway.

Try to keep that in mind today, if you don’t follow my advice below, and take the electoral system seriously.

But first, some more important news.

The honeymoon is over. For me and the Australian property market…

After the wedding came the auction

Two days after my wedding, we took my new Japanese in-laws out for a quintessential Australian experience. A property auction on the Sunshine Coast.

But it was a bit melodramatic in the end. Nobody bid. And that was the second time around for the property. Last time, the vendor rejected the highest offer. Big mistake, as it turned out.

To be fair, the vendor’s terms didn’t allow for bids ‘subject to finance’. This undermined just about everyone’s capacity to buy, according to the auctioneer himself.

Not that finance is particularly forthcoming in Australia at the moment. The total value of investor mortgages fell 28.6% from January 2018.

Other disappointing property stats continue to fly in. They come in all shapes and sizes these days.

Dwelling approvals for March declined by 27.3% from the year before.

CoreLogic reports 76% of properties selling for less than listing price, at 6% below on average for the first quarter of 2019.

You know you’re in trouble when ‘the only positive figures in Australian property right now are prices in Hobart’, as Finder.com put it.

The Australian Financial Review says one in 25 mortgages is in negative equity. But only under an alternative statistical methodology to the one used by the banks. We know the banks are good with accurate figures though.

It’s also becoming harder to escape the bust. As property owners here in London are discovering the hard way too, it’s difficult to calculate what your property is worth when nobody wants to buy it.

Listings are appearing, disappearing and reappearing according to the watercooler chat here at the office. For the few who found a new home, moves are on hold because nobody showed any interest in their existing properties.

You can’t sell, you can’t buy. Nobody mentioned that to those who got on the property ladder…

Back in Australia, the outlook keeps getting worse too. Economists aren’t expecting an improvement in property prices for years now.

But don’t worry too much about the property bust. Your saviours are on the way. The politicians are waking up to the opportunity it presents. And riding in to save the day. Only if you vote for them today though.

To battle the property malaise, the Coalition wants to copy the US housing policy of the early 2000s. It wants to help a load of people who can’t afford property onto the property ladder using government funds.

What could possibly go wrong? And isn’t that precisely what the banks just got into trouble for?

The capacity of English-speaking politicians around the world to copy each other’s failed policies is worth a few Daily Reckoning editions in and of itself. Here in the UK, they copied the Aussie first homebuyer’s grant after it became known as the first home vendor’s grant.

Former Reserve Bank Governor Bernie Fraser isn’t worried about the Coalition’s scheme to support homebuyers. He’s backing it, despite the comparisons to America’s Fannie Mae and Freddie Mac. After all, ‘caution among banks would prevent borrowers taking on excessive debt’, says Bernie.

Clearly, someone hasn’t been reading the news…

But it looks like Labor will win the election anyway. What does it have planned for property?

Yellow Brick Road founder Mark Bouris is in trouble for providing the answer. Here’s part of what his pre-recorded robo-call told potential voters, potentially in violation of electoral advertising rules:

‘If Labor wins and they bring in negative gearing changes and the capital gains tax changes, house prices will fall, they’ll continue to fall at a very rapid rate, and what’s worse our kids are going to have to pay more rent because investors are going to have to put the rent up to recoup the losses they would normally get as a tax deduction.’

This makes we wonder why people invest in an asset that delivers them losses each month in the first place.

How to vote today, whether you like it or not

So, how should you vote today? Inspired by Bouris, I’d like to send out my own message. I’d like you to try something new at the ballot box.

Keeping in mind that not voting is illegal, you should do the following: Close your eyes and mark the paper at random.

In three years’ time, we’ll touch base and you can tell me if it made any difference compared to previous elections. Did your random vote impact your life differently?

Of course, few of you will take me up on the suggestion. Fair enough. My own attempt to buy a house here in London has me fretting about a Labour government too. Their reforms make Bill Shorten look boring.

Either way, just remember one thing. The government and its minions control both the supply of property and the demand. They make zoning laws and fiddle with interest rates.

When things go wrong, you’ll know who to blame, however you vote.

Home » Property Market » Can you vote your way out of a housing bust?