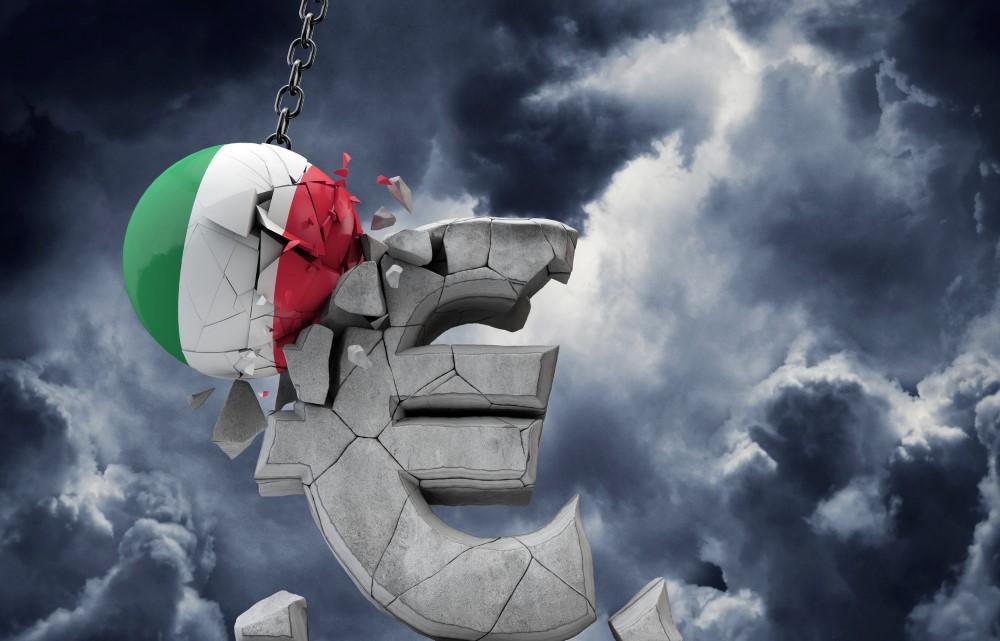 The largest default in history is back on the cards. As is the financial meltdown that would follow.

What’s changed? Italy’s government is in crisis. A minor coalition partner resigned from the group, losing the current government its slim majority. And since the last election, the eurosceptics have gained a lot of ground in the polls. While Brexit has made taking on the EU look viable.

Will 2021 be the year Italexit goes mainstream? And what does Italeave mean for you?

It’s not about the EU, for Italians. It’s all about the euro. It has destroyed their economy.

The trouble is, Italy can’t leave the euro without defaulting on such vast debts that it’d trigger a global economic and financial crisis. In fact, it’d be the largest default in history, with only past shipwrecks to guide us.

These are all big claims and predictions. But I spent much of 2017 writing a book about them, predicting a crisis in early 2018 and late 2018. Both played out as expected…at first.

The lynchpin of my argument came unstuck when a surprise group of political arch-enemies formed a coalition government to try and prevent an election. An election that would likely have delivered government to parties which were harshly critical of the EU and euro. Under a prime minister who had called the euro a ‘crime against humanity’.

Well that coalition has finally fallen apart. And, although the Italian president may yet manage to rescue Italy’s Europhiles from its Europhobes with some new Frankenstein coalition, the risk of a major crash beginning in Italy is back.

Which means it’s time to warn you about it, and to explain why I’m so worried…

The euro is disastrous

Under the euro, the wrong monetary policy and exchange rate applies in every eurozone country. That’s because a single interest rate has to be set for all of them, despite the vast differences in their economies.

We all understand the disruptions and misallocations this would cause, which is why we have our own currency. Our central bank and exchange rate try to keep our economy on an even keel.

But inside the eurozone, a booming German economy and a moribund Italian one share the same interest and exchange rates. Or, if you prefer, before 2007 the same interest rate held Germany back while financing booms in Ireland, Greece, Spain and Portugal. Only Italy seems to have been stuck underperforming the whole time…

The consequences have been exactly what you’d expect. Housing bubbles punctuated by crashes, sovereign debt bubbles and a failure to correct trade balances.

But there’s a more important problem. One that makes the eurozone unique. And why a real crisis will begin there.

They can’t print money like the rest of us

These days, governments don’t fear default because money printing has become so acceptable. While Australia can print enough money to save itself from an economic or financial crisis caused by government debt defaults, because it has control of its own money, the Italians cannot.

They rely on the European Central Bank (ECB) to break its own rules and take pity on them. The Germans will only go along with this for so long because they fear money printing and rewarding the fiscally imprudent with bailouts.

Eventually, the ECB’s rescue of Italy will hit legal or political limits. Especially if a eurosceptic government refuses to accept the reforms which the EU requires in exchange for financial backing from the ECB.

Another problem is that of Target2 balances. Usually, nations with a trade surplus receive something of real value in return. Gold under a gold standard, or assets in foreign countries under our current system. But inside the eurozone, nations with surpluses get Target2 balances instead. It’s a sort of debt, which nations like Italy owe to nations like Germany within the eurozone.

But if Italy leaves the euro, it would have to pay back this debt. Well, theoretically anyway. And yet, Target2 balances are not counted as sovereign debt on the balance sheets. Which means Italy’s true foreign debts are far larger than they seem.

Of course, those in favour of leaving the euro are also in favour of defaulting on the debts they’ve incurred because of the euro’s bad effects. And that’s why all this matters. The default risks global financial chaos.

The political situation in Italy is now as follows: The government’s majority is lost. The prime minister can resign or ask the president for a new mandate with a new coalition. This coalition would likely have to be confirmed by a vote of confidence.

A unity government in the face of the pandemic is another option. But if all this fails, elections are on the cards. During a pandemic!

The remarkable thing is that the former PM who withdrew his small party from the coalition did so over how EU bailout funds would be spent under the Italian proposals. He argued they’d be squandered instead of invested. And yet, he’s put so much more at risk.

The EU has bungled its COVID-19 response in more spectacular fashion than usual. European Commission President von der Leyen even apologised to Italy for this. But there’s a particular aspect to focus on. The latest drama over vaccines.

European nations had put their faith in the EU system of approving and distributing vaccines. But Britain took an independent approach.

The Guardian wrote of the divergence at the time of the decision:

‘Brexit means coronavirus vaccine will be slower to reach the UK’

Unfortunately, the experts were rather wrong.

‘Britain has become Europe’s leading light in the effort to vaccinate against coronavirus.

‘Latest figures reveal the UK has given 10 times more jabs than many of its European neighbours’.

This is just the latest example of EU failure in the eyes of the Italians. UK columnist Ambrose Evans-Pritchard, who has often warned about Italy’s financial crisis too, wrote ‘Europe’s vaccination fiasco threatens to become the EU’s biggest failure’.

All this means that euroscepticism is riding high in Italy. And the Italians will likely express that at any upcoming elections.

So, will the Italians escape a eurosceptic government again? I don’t know.

But I do know the Italian crisis is back on the agenda. And I’ll be keeping you informed about how it unfolds, with one eye on the Italian bond market at all times.

This may be how COVID-19 mutates into a global financial crisis.