De Grey Share Price Up Again, Where to Next? (ASX:DEG)

The $686 million capped explorer/developer announced this morning it had made significant shallow discoveries at its Mallina Gold Project.

DEG shares jumped nearly 64% in just a few days at the beginning of June on the back of significant extensions at Mallina. 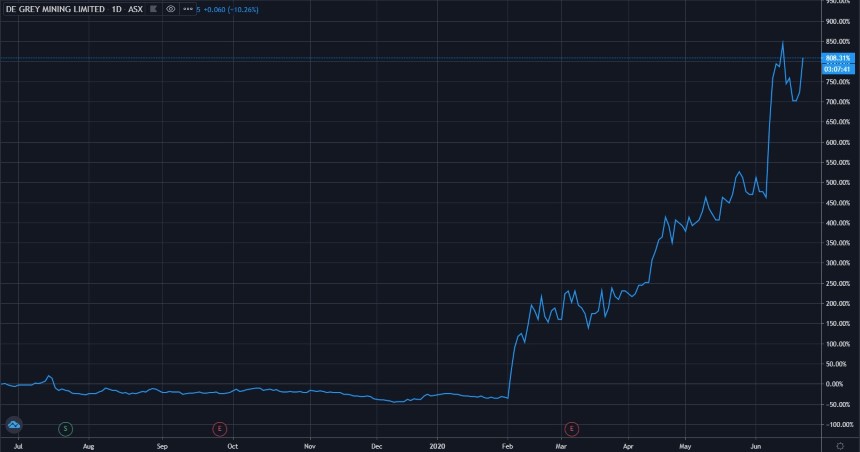 Are explorers rushing to find gold?

Last week I noted what seems like a constant stream of new ‘high-grade gold finds’ on the ASX.

The record high gold prices we’re currently seeing could be spurring on explorers to get in while the going is good.

De Grey’s shares have been on a tear since February following a series of positive announcements about drilling results from its Hemi prospect, part of its Mallian project.

This trend has continued today, with the latest results expanding the footprint of the Hemi prospect.

Some highlight results include:

The Mallina Gold Project is located approximately 50km south of Port Hedland and is considered a top tier mining jurisdiction of Western Australia.

The project already hosts 2.2Moz of shallow gold resources, all within approximately 50km of the new Hemi gold discovery.

DEG has been extensively drilling at Hemi, expecting it would significantly add to the already identified resource.

And it seems to be paying off.

Specifically, the company has been targeting the Aquila Zone at the Hemi prospect.

Aquila is a 1.2km long linear mineralised zone and remains open in all directions.

They might also be keen to get this done quickly as they have six drill rigs now operating on site.

The DEG share price really only took off on the announcement of gold discoveries at Hemi.

This is despite drilling turning up promising results back in 2019.

Could it be a case of gold fever hitting the market?

Regardless, there is clearly a lot of interest — and expectation — surrounding DEG at the moment.

With several other similar prospects close by to Hemi currently being targeted by DEG’s drilling rigs, there could be room for further improvement.

If you’d like to learn more about Aussie miners and explorers, or you just want to stay up to date, make sure to subscribe to The Daily Reckoning Australia, it’s a great way to stay ahead of the curve when it comes to Australian miners. It’s free too. Subscribe here.