The De Grey Mining Ltd [ASX:DEG] share price has broken through resistance and has shot up after being released from a trading halt yesterday.

The push upwards comes after news of further mineralisation extensions at Hemi.

When we covered DEG last week shares had met resistance at around the 85-cent level.

A week on and DEG has now broken through that level and reclaimed the key $1 mark.

The new bout of upwards momentum lands shares close to their 52-week high of $1.065. 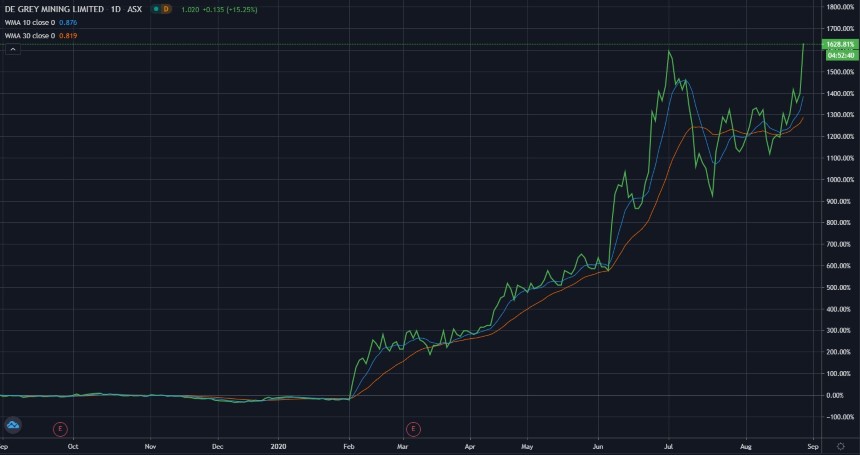 Last week I noted that the reason for the recent price resistance could stem from a shortage of tangible new information coming out of Hemi.

Though results claimed to grow the mineralisation, they appeared to be confirming investors’ expectations.

Not a bad thing.

Just not enough to get the share price going.

Something that would likely increase the gold endowment at the project.

Today’s drilling results have transformed the original perceptions at the Crow zone on the Hemi gold discovery.

‘[Results] demonstrate the potential for Crow to significantly add to the overall gold endowment at Hemi and to meaningfully contribute to a potential large scale, near surface open pit production scenario. The mineralised footprint at Crow is currently approximately 1,000m by 400m and remains open.’

Results are visualised below. Notice the thick gold mineralisation in the centre.

According to DEG it is the best result drilled on the project to date.

Hemi shaping up to be a tier-1 deposit

A tier-1 gold asset is a mine with a stated life in excess of 10 years, annual production of at least 500,000 ounces of gold.

Which will put Hemi up there with Olympic Dam, Broken Hill and Cadia East mines.

There is little doubt of DEG’s success thus far.

With the boom in Aussie gold stocks recently, Australia could surpass China as the undisputed global leader in gold exploration, mining, and production. Our gold expert Shae Russell breaks down what Australia becoming the new gold ‘epicentre’ means for gold and your Aussie gold stocks. Click here to download the free report.