The Dreadnaught Resources Ltd [ASX:DRE] share price has tapered off a little since we last covered the explorer, finding a new floor about 200% above its average price over the past five years.

At time of writing the DRE share price is up 5% to trade at 2.1 cents per share on the back of new results from its Illaara Gold-VMS-Iron Ore Project in WA. The share price has come down about 40% from its peak in early October, when speculators piled in before maiden results from Longmore’s Find at Illaara were released.

The price of gold recovered slightly overnight after copping a bit of a beating over the past few days.

Which could have contributed to DRE’s share price gains today.

Highlights from the 13-hole program include:

Unfortunately, only five of the 13 holes intercepted significant gold mineralisation, with one hole still awaiting results. 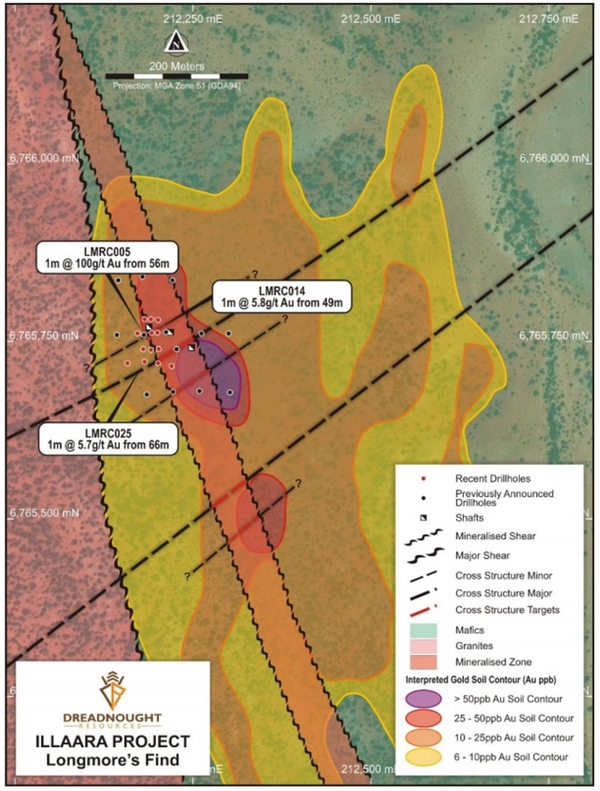 While the holes that did intercept gold have produced quite high-grade results, they are a far cry from the 100g/t first reported in October.

DRE admitting that their current results are neither consistent nor coherent with the original find.

However, there is a silver lining.

DRE’s lower-grade results suggests that the mineralised lode is not running in the orientation initially interpreted.

But instead, may be trending subparallel to the drill direction, as you can see in the figure above.

Confirming that new drilling will be rotated in a more N-S orientation and is expected to commence in February 2021.

Learn from your mistakes

It’s a bit of a ‘hope and pray’ situation for Longmore’s Find now.

If DRE fail to turn up any decent results in their upcoming drill program that could be the end for Longmore’s, in my opinion.

But it could be worse.

There is still plenty of exploration to be done at Illaara and the mistakes made at Longmore’s Find could assist the DRE geology team in their understanding of the mineralised system.

PS: Our resident gold expert, Shae Russell, has tipped Australia to become the next ‘gold epicentre’, meaning there could be big spikes ahead in Aussie gold stock prices. If you want to learn more, download your free report here.