Last time we wrote about this gold explorer, they had just completed a 65-hole drilling program in their Saman permit in Guinea, West Africa.

You can read all the details on that here.

Today, they released an update on the drilling, and, it’s good news.

In case you are not familiar with the company, Predictive Discovery Ltd [ASX:PDI] is an ASX gold explorer focused in West Africa. Here is a map showing their projects in Guinea: What did Predictive Discovery have to say?

The objective of their 65-hole 1,300m power auger drilling program was to explore how far the NE Bankan gold discovery extends.

The NE Bankan is a large gold anomalous zone initially identified through soil and laterite sampling programs. It lies within the Saman and Kaninko permits, both 100 % owned by the company and adjacent to each other, as you can see in the map above.

Initially, the company thought the strike extended for 500m. But back in May, after doing some drilling, the company ended up doubling that extension to 1km.

The company also released the results for their shallow drilling. These included intercepts of 16m at 1.13 g/t gold and 16 m at 1.39 g/t gold within the new 300m long zone and 0.25 g/t gold mineralisation.

Predictive Discovery shares are up today by 1.12%, with shares trading at nine cents at time of writing.

But there’s more. The company thinks the NE Bankan strike could extend even further, both to the north and south.

That’s why they are doing more drilling.

As you can see in the map below, they are already drilling another five-line (65-hole) to the north and another 21-line (294-hole) power auger drilling to the south. The company also said they continue to test oxide mineralisation within the defined gold mineralised footprint through reverse circulation drilling. 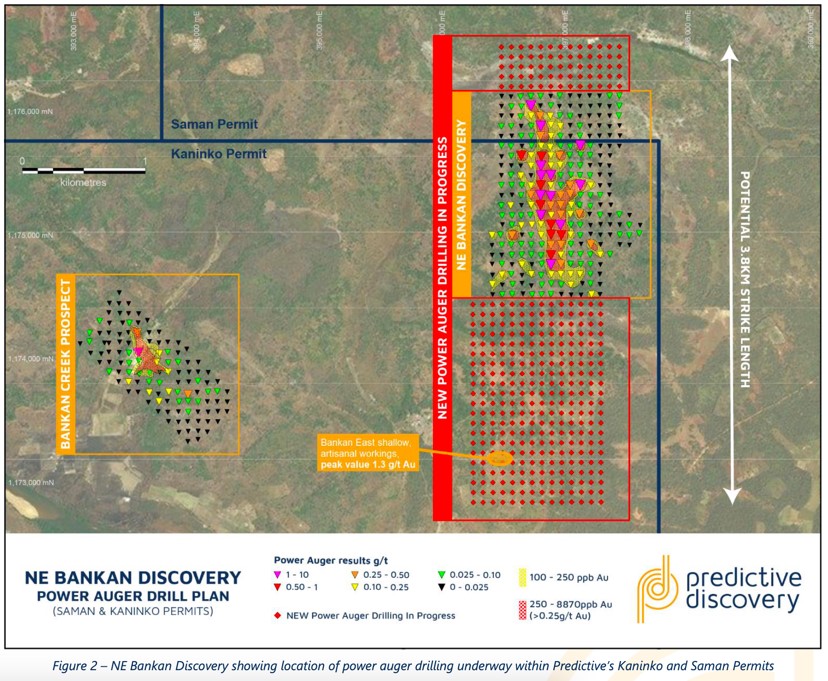 So far, the PDI share price has increased by over 1,000% this year.

But it’s not easy to pick gold explorers like Predictive. A less risky way to get exposure to gold is by holding gold directly.

Check out Shae Russell’s step-by-step guide on the ‘Best Way to Buy, Sell, and Store Gold’.