The best safety net is a gilded one I was once a circus performer. And instructor.

The first thing you learn in the circus world is very helpful for investing.

Always have a safety net. And learn how to fall in it properly. Before you do anything else.

The first time one of my coaches stood up on the board of a flying trapeze rig, his mentor immediately pushed him off.

The seven-metre drop to the safety net gave him enough time to make sure he landed safely on his back.

And that ability and lesson is what kept him safe from then on.

In fact, each time you learn a new trick in flying trapeze, you first learn how to take it to the net consistently and safely.

Once you’ve proven you’re extremely good at failing, the catcher is willing to get up in his swing and try to catch you.

But the timing is different for each and every person, so it usually takes a few more missed catches and bounces in the net before things work out.

So what are investors supposed to learn from all this?

Things like using stop losses, defensive asset allocation, proper diversification, risk management, being able to profit from falling stocks, dummy trading, and having some of your wealth outside the financial system.

These are crucial tools to protect yourself. You need to know how to use them.

There’s one asset which covers a whole bunch of those safety net features. Gold.

Buying gold is so unpopular with the mainstream investment industry because it’s an admission that things can go badly wrong.

They prefer to pretend nothing can go wrong.

You only need to look at 2008 to see the weakness of this argument.

A flying trapeze performance would be much more exciting without a net.

But anyone who has tried flying trapeze without a net will tell you it’s not much fun and looks terrible.

It’d feel like you’re naked at work. Your job performance would suffer immensely.

Which is why the trapeze artists who have flown without a net tend to do so under the influence of alcohol after a hard day setting up most of the rig, but not yet the net.

As in the circus world, in investing, things do go terribly wrong. Stocks crash, banks go bust and countries default.

The models professional investors use suggest these events are so unlikely that it doesn’t pay to worry about them.

People with experience in the circus are probably a better bet on this sort of risk.

The thing is, if professional investors aren’t willing to take market plunges into account, that creates an opportunity.

And the best way to take advantage of this opportunity is gold.

Gold has had a miserable few years of investment returns.

Despite huge amounts of QE being pumped into financial systems around the world, the gold price only trundled sideways.

In Australia, the story is only different for one particular reason.

A reason Shae Russell lays out in detail. And you can see its power in the surge of gold priced in Australian dollars. 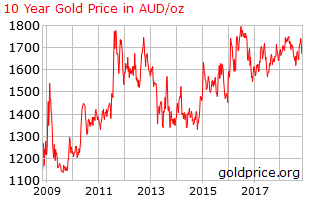 Gold’s ability to generate profits from a falling Aussie dollar is in and of itself useful.

I call it the gold quadrants effect. It’s the reason why Australian investors benefit more than anyone else from investing in gold.

But there’s a different reason why now might be the time to buy gold.

Gold does well when real interest rates are falling. In other words, when inflation is rising faster than monetary policy can keep up.

In the run-up to the global financial crisis, gold had an enormous bull market. A bull market which made our publishing company’s founder wealthy and his writing about gold renowned.

We may be entering the same sort of market in most of the world.

A world where central bankers struggle to keep up with rising inflation.

Because if they raise rates too fast, they’ll trigger the next crisis. So they’ll err on the side of sluggishness.

The world has taken on huge amounts of debt. Interest rates can’t go up much without that debt becoming unaffordable.

This could leave us with an inflationary surge that can’t be reined in.

That’s an ideal environment for the gold price to surge.

Usually, you read about gold as a crisis hedge in the Daily Reckoning Australia.

And yes, the gold price can perform well when other assets are tumbling. Not to mention you can own gold safely outside the financial system, which is true diversification.

What I’m trying to show you here is that gold could be a good investment in coming years even if you don’t believe there will be a crisis.

Gold is like the safety net under the central bankers’ tightwire act.

It doesn’t matter which way they fall off; gold still has you covered.

Home » Gold & Commodities » The best safety net is a gilded one