‘The economy is crashing’ indicator is back… My favourite ‘the economy is crashing’ indicator is back again.

I like to call it my market crystal ball.

You don’t need to read statements from the Reserve Bank of Australia.

You can even skip the budget forecasts from governments.

And we are looking pretty unwell…

Did I watch it? Nope.

Late into the evening, I read a few snippets. They was full of the fairy tales I was expecting.

Much of the noise though — mostly from the current government — is that Australia is ‘back in the black’ with this budget.

Of course, it didn’t take long for Opposition Leader Bill Shorten to shut this down. He called the budget a ‘con job’, saying it’s designed ‘to get the government through the next six weeks’.

Those are fighting words.

With an election only weeks away, both sides of government will come out swinging, presenting an idealistic budget to the public in order to grab a few votes.

Shorten’s tone is probably a good indication of how nasty this election is going to get.

I won’t go through the details of the budget. This news will be chewed over by the mainstream media for the rest of the week.

However, I’ll just make one thing clear, to help you cut through all the noise from both sides of politics.

The budget isn’t actually back in surplus. It’s a forecast.

It’s also based on the assumption that all economic conditions remain exactly the same.

The one thing holding up the economy just crumbled

It’s been a rough week for retail.

First, Big W announced it was closing 30 stores across Australia.

Roughly 16% of the discount retailer’s stores will be closed, with Woolworths taking a $370 million hit to its 2019 bottom line.

Exactly which stores will close is not yet known. However, Vicinity, Stockland, Scentre Group and SCA Property Group have the majority of BIG W store leases.

Unsurprisingly, the majority of the stores to be closed are regional ones.

Closing stores midway through a lease is never a good sign.

The woes of the retail sector were then compounded when National Australia Bank’s Online Retail Sales Index dropped by 3.4%.

But let me show you what it looks like… 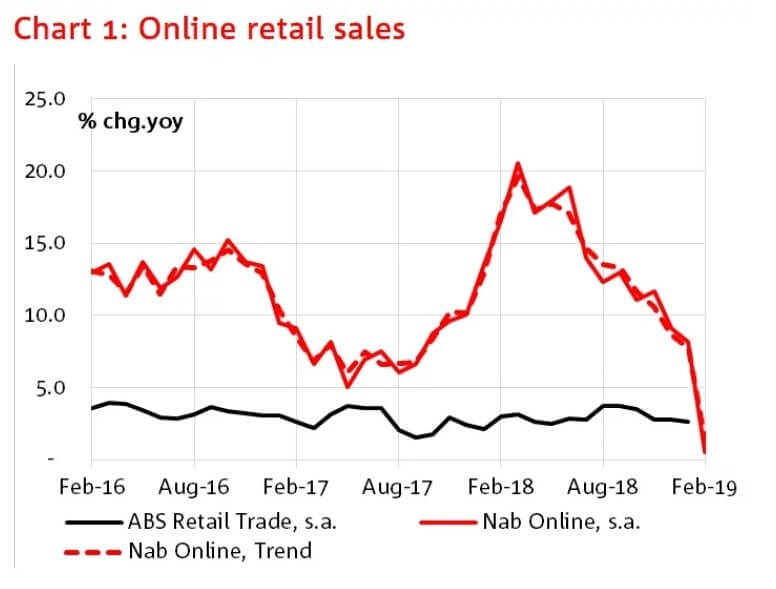 This chart shows us just how drastically people are reducing their spending online.

Of course, this is just data from one bank — not even Australia’s biggest bank.

But it adds to the overall picture of how gloomy the retail sector is.

Not only are people spending less in stores and reducing their online shopping, but the number of people wandering the shops has dropped off completely.

Are you ready for it?

Why does retail matter?

I mean, who cares if people buy less shoes and clothes? We have too much stuff as it is.

That budget windfall — the very one the Aussie government reckons will give us a surplus — came from goods and services tax (GST). This is applied to very non-essential purchase in Australia.

While the majority of the forecast surplus has a lot to do with a weaker Aussie dollar and higher commodity prices, consumers also play a crucial role.

And when consumption drops, our national income falls.

This makes the promise of a budget surplus very difficult to keep.

No amount of vote-buying tax incentives or one-off handouts are going to have a long-term impact on spending.

In other words, the consumer spending has dried up.

Retail data is like your market crystal ball. It shows you the health of the Aussie economy.

And things are looking grim.

Home » Australian Economy » ‘The economy is crashing’ indicator is back…