The Gold ‘Mega Melt’ Up Is Here

It was the sector that was left for dead…

The value of the commodity fell so sharply, that for some companies it simply became too expensive to mine.

Firms gave up looking for it.

Only idiots were sticking their money in this asset…

Bitcoin was still only a novelty for the indoorsy, gamer type. Nobody had heard of the ‘FAANG’s’.

The Fed had yet to begin raising interest rates. And that year, the best performance sectors of the US stock market were real-estate and utilities stocks.

Close to home, our own Reserve Bank of Australia had set the cash rate to 2.50%.

Iron ore prices fell 46% and oil continued to slide by almost half.

So, it comes as no surprise that the Aussie dollar tumbled along with commodity prices. Falling 13% against the US dollar, from 89 US cents in January to 77 US cents by December that year.

And then there was gold.

The 2011 gold bullet market was over.

Once the metal reached AU$1,390, many gold miners in Australia closed up their gold operations.

The sector was dead.

Surely only a fool would put their money in gold.

What happened when you weren’t looking

Oh don’t get me wrong, the yellow metal dropped another 10% in US dollar terms.

But those investors just happened to be central banks.

Not major central banks either.

The smaller ones…the sort of emerging markets no one pays any attention too. 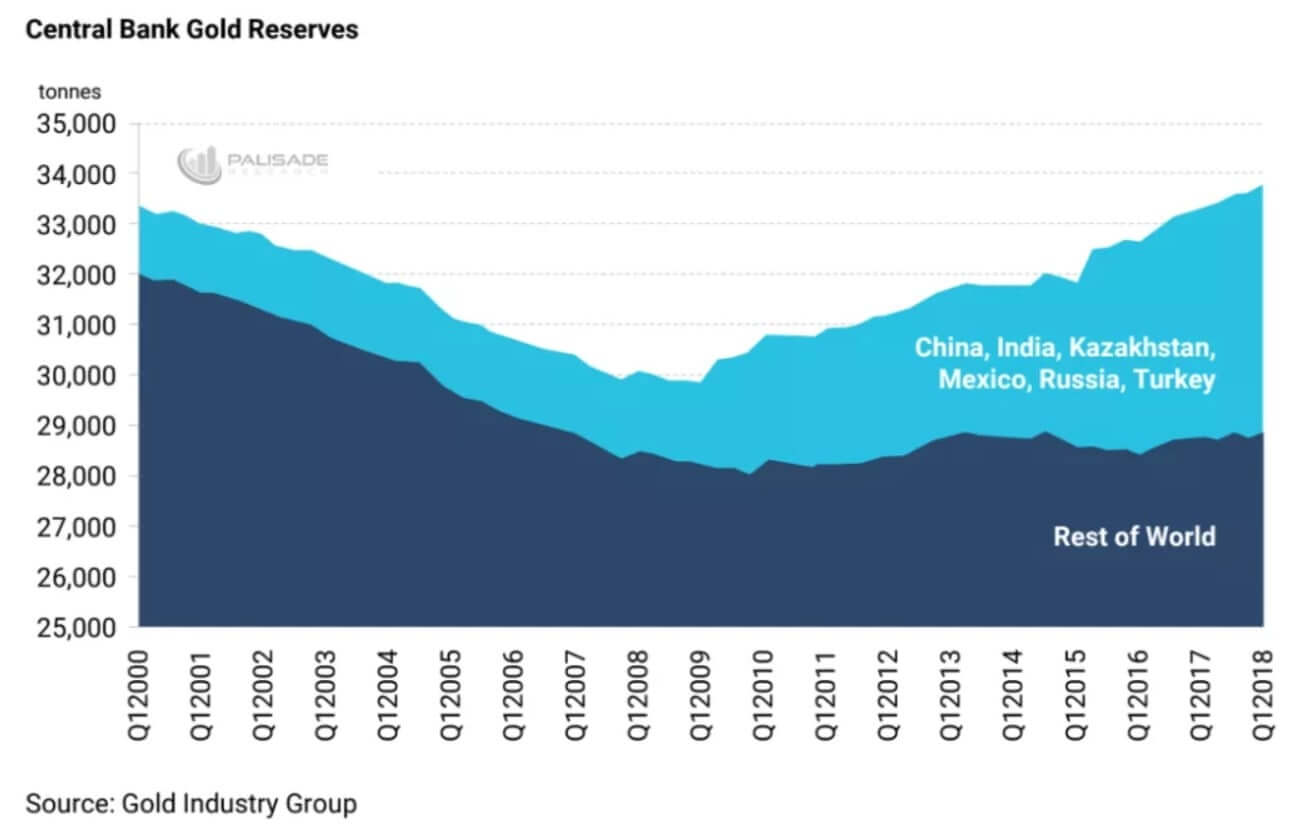 While most of the West wasn’t looking, China, India, Russia, Turkey, Mexico and Kazakhstan slowly began to increase their physical gold position.

That brings us to today.

This time, Poland, Egypt and even Hungary were keen to publicly announce their decision to hold more physical bullion.

For the first time, a small collection of central banks is on the front foot.

They are preparing to protect their countries wealth with a robust physical gold holding.

Once again though, their moves are invisible to the rest of the market.

Yet, there is a new gold rush underway. And you don’t need to analyse the moves of central banks this time.

The new gold rush is playing out in mainstream headlines as we speak.

It began last year, when Newmont Mining made a bid for Goldcorp.

Two months later, Canadian based gold giant Barrick Gold made an offer for Randgold. Together those two became a US$24 billion gold behemoth with the largest gold reserve base in the world.

Newmont’s management have rejected the offer. Saying Barrick has undervalued the company.

But for gold investors, this is a very big signal for what’s to come.

The gold mining giants are fighting over each other’s assets.

Essentially they are setting stage for a mega melt up in gold companies. That is, a rush to buy up one another to become the gold miner with the largest resource base.

This is the year gold mine assets become controlled by just a few.